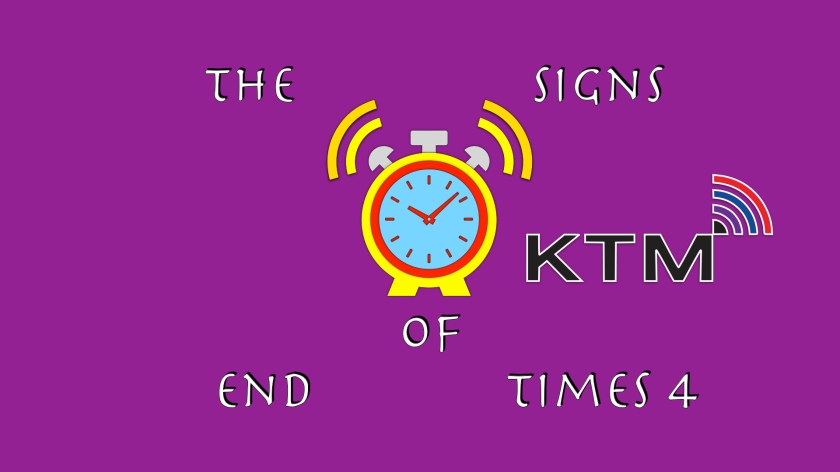 3As he sat on the Mount of Olives, the disciples came to him privately, saying, “Tell us, when will these things be, and what will be the sign of your coming and of the end of the age?”

4And Jesus answered them, “See that no one leads you astray.

5For many will come in my name, saying, ‘I am the Christ,’ and they will lead many astray.

6And you will hear of wars and rumors of wars. See that you are not alarmed, for this must take place, but the end is not yet.

7For nation will rise against nation, and kingdom against kingdom, and there will be famines and earthquakes in various places.

As a tradition since 1995, at the end of every year, Japanese choose a Chinese character to define that year. The Chinese word “disaster” is the symbolic word of 2018. If you pay close attention to the news, Japan has suffered from a lot of natural disasters in the past 12 months.

Last July, floods swept across Japan, killing nearly 200 people, resulting in the evacuation of about 9 million people in 23 prefectures. Moreover, at least 65 people died in the heat wave and more than 22,000 were hospitalised. With the high speed of up to 172 kilometres per hour, a typhoon thrashed the western part of Japan. It is said to be the strongest typhoon to hit Japan in 25 years. In addition, the northern island of Hokkaido suffered a magnitude 6.7 earthquake, which triggered a landslide.

The Increasing Number of Disasters

The Lord Jesus warned His disciples in saying, 7For nation will rise against nation, and kingdom against kingdom, and there will be famines and earthquakes in various places. 8All these are but the beginning of the birth pains. (Matthew 24:7-8) Before Jesus Christ returns to the earth, famines and earthquakes will become more and more frequent, all these are but the beginning of the birth pangs. Some people might question in saying, “Disasters have existed since ancient times, so what’s so unusual about that?” According to Encyclopedia Britannica, many severe earthquakes occurred around the world in the 21st century. Here are just a few of the many incidents:

Japan: Japan earthquake and tsunami of 2011. Not long ago a magnitude 7.0 earthquake that struck near Anchorage, Alaska (November 30, 2018). It crushed roads and shattered buildings, sent residents scurrying for cover.

The Lisbon earthquake of 1755 claimed ten to fifteen thousand lives and reduced three-quarters of the city to rubble. Jesus speaks of the coming disasters as “the beginning of the birth pains”. If there were no wars, perhaps people can prevent the occurrences of hunger and famines, but the incidents of earthquakes are completely out of the control of kings and politicians, because these are natural disasters. Although there are sophisticated instruments to warn us about the coming earthquakes, we simply cannot stop them from coming. Earthquakes are indeed horrifying!

What happened on March 11, 2011? Japan faced the “triple disaster” that day. It is caused by the devastating mega-earthquake, tsunami and nuclear disaster. It marked the most expensive tragedy in history. Losses reached more than $235 billion. Almost 1 million people had to leave their homes. For these reasons, Japanese leaders declared a state-level crisis for the first time since World War II. Friends and believers, earthquakes can bring destructive chain reactions.

2) Be Prepared for Birth Pains

Although it happened many years ago, I still remember as if it happened yesterday. As parents-to-be, my wife and I attended prenatal classes. Honestly, I learned a great deal from these classes and the most important thing that I learned was to gather some crucial items for my wife in a travelling bag. When my wife was ready to give birth, we could go to the hospital immediately. In simple terms, parents-to-be must be prepared for birth pains.

The Lord Jesus solemnly states that before He comes again, natural disasters such as earthquakes must occur. This is the beginning of birth pains. As believers in Christ, we must be prepared for the coming birth pains.

3) The Joy after Giving Birth

Scientists point out that the earth has a lifespan, meaning that it will not last forever. I am not a scientist nor a theologian, but I believe earthquakes are wake-up calls, reminding us of the coming dangers, and the earth will end one day.

Birth pains were in fact a common Jewish metaphor to refer to an unspecified period of suffering leading up to the end of this age. Famines and earthquakes are the inevitable signs of End Times. These natural disasters are like birth pains that paves the way for the Second Coming of Lord Jesus.

As a man, I can also identify the extreme painful experience of giving birth. Beside the delivery room, I heard the loud screams of women who were in labour. Moreover, I witnessed the suffering of my wife during labour. After giving birth to their babies, many women vowed not to be pregnant again, but, strangely, numerous women would still conceive and give birth again. The reason is very simple. Although giving birth is painful, mothers would have the greatest pleasure of witnessing the birth of their own flesh and blood and hugging their newborn babies in their arms. At the end of the natural disasters, the Lord Jesus will return to earth, and God’s children will then enjoy eternal peace and joy. Famines and earthquakes are the birth pains before the Second Coming, and when Jesus returns to the earth, He will bring joy to His followers. Dear friends, Jesus Christ came to the world and died on the cross for all the transgressions of all humankind. Also, He rose from the dead three days later. The Lord Jesus has accomplished salvation but He expects all those who hears the Gospel would accept His saving grace. Dear friends and Christians, Jesus Christ will definitely come again. Earthquakes will increase in numbers and God is using these signs to warn us. Are you ready for His Second Coming?